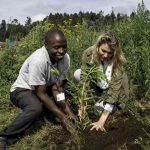 At Wilderness Safaris Bisate Lodge in Rwanda, each guest is a conservationist – making an important contribution to Bisate’s vision of reforestation and rehabilitation, whilst contributing to local community empowerment at the same time.

This forms part of Bisate’s commitment to offering life-changing journeys that have a dramatic and far-reaching positive impact beyond just the Endangered mountain gorilla, to the entire Bisate ecosystem and its neighbouring community.

Bisate’s ecotourism offering and reforestation programme ensure that each guest is a conservationist.

“When we launched Bisate in June 2017, Rwanda’s first eco-sensitive safari lodge centered on Africa’s most immersive wild primate experience, we wanted to ensure that our brand of responsible ecotourism made a real difference to both rural Rwandan people and biodiversity conservation. We are still deeply committed to this purpose, having already planted over 25 000 indigenous trees on the Bisate site as part of our ambitious reforestation programme; we are also working closely with our community partners on numerous empowerment initiatives”, commented Wilderness Safaris Rwanda GM, Ingrid Baas. The project has resulted in the encouraging recovery of biodiversity on the property and the return of many endemic bird, butterfly and more lately, significant mammal species. It has inspired numerous other reforestation projects run by conservation and community NGOs, and other tourism businesses, sparking a local “tree-revolution”.

An important part of the development of Bisate was Wilderness Safaris’ acquisition of 172 plots of formerly agricultural land to implement the ecological rehabilitation of Bisate’s 42-hectare site.

Not only did this aid in the success of the programme, but it also injected over US$500,000 into the local economy, managed by the 320-member Tuzamurane Cooperative, a conduit through which all business is conducted between Bisate Lodge and the Bisate community. This partnership forms part of Wilderness Safaris’ 4Cs ecotourism philosophy – its Commerce, Culture, Community and Conservation ethos of creating mutually beneficial partnerships that involve communities in the revenue stream, as well as other benefits of ecotourism.

Bisate continues working closely with the community on its development, including the tree nursery, roads, construction and more. Wherever possible the lodge sources local suppliers of goods and services including vegetables, fruit, milk, firewood and casual labour from the Tuzamurane Cooperative, as well as sewing projects such as handbags, coffee purses, serviettes, woodwork, woven baskets, walking sticks and room signs. The lodge employs over 50% of its staff directly from the surrounding area and tries to benefit nearly all neighbouring families in one way or another, through the donation of clothes and blankets to the most disadvantaged community members. The welcoming people make it ideal for guests to visit their community and learn more about Rwandan culture, which also contributes to the local economy.

The relationship between Bisate Lodge and its neighbours has resulted in a number of community development initiatives, including supporting the women’s cooperative. In a recent addition, Bisate has been assisting members of the Tuzamurane Cooperative with a bee-keeping project.

Bisate has also been working with Children in the Wilderness to support Bisate Primary School. The school currently has two active Eco-Clubs that run weekly; it has also been a beneficiary of scholarships for learners who lack financial means, as well as the recipient of IT equipment and internet access. “The combination of the reforestation project, community engagement, authentic cultural experiences, eco-friendly operational systems and more, takes our Bisate guests well beyond the ‘gorilla express’, and greatly enriches their experience of this extraordinary place”, Ingrid added.

0 0 0
Previous : Brush up your Sushi skills with host families in Japan with airKitchen
Next : Airbnb looking for five volunteers to join scientific research mission to Antarctica