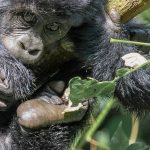 Acacia Africa has updated its top ten list of the most popular destinations to visit in Southern and East Africa, the results compiled from expert sources and Instagram hashtags. In the 12 months since the original data was made available there have been some significant changes – Uganda taking the top slot from South Africa and Mozambique moving from tenth to third place.

Arno Delport from Acacia Africa comments, “With Instagram racking up 1 million users in June 2018, its growth outperforming Facebook and Snapchat, the photo-sharing app is clearly well on its way to becoming the most authentic travel brochure in the world. Its power for inspiring our wanderlust has been proven time and again, making Instagram a reliable source of information on destinations that are trending.”

The cost of trekking the endangered mountain gorilla in Uganda is half that of neighbouring Rwanda, and while the price differential might well have drawn more people to visit the country over 2018, Acacia claim our growing concern with over-tourism and eagerness to see places which are less well visited or where tourist numbers are more strictly monitored to protect the environment, in this case the gorillas habitat, is behind Uganda’s rise to fame.

Arno Delport comments, “Mountain gorillas in East and Central Africa were taken off the ‘critically endangered’ species list after last year’s census, with the total number of mountain gorillas (living in the Virunga Mountains and Uganda’s Bwindi Impenetrable National Park) now believed to be above 1,000 individuals. In 2018 there was an exciting baby boom at Bwindi and later in the year, Uganda Tourism announced the successful habituation of three new gorilla families and the addition of more permits: 19 gorilla families now available for trekking and the total number of trekking permits standing at 152 per day.”

Nine-day Troop to the Gorillas from £855pp (no single supplement) + gorilla and chimp permit from £560pp including transport, camping accommodation, gorilla and chimp viewing, most meals and services of a tour leader/driver. Year-round departures. Starts Kampala – ends Kampala. 18-39 years.

A country where caring for the environment takes precedence over tourism, Mozambique isn’t such a wild card when you consider how much more knowledgeable and informed we are about eco-tourism, as ultimately, claims Acacia, those concerns usually inform our’ travel plans.

In late 2017, as part of an eco-overhaul, the conservation NGO, African Parks (which manages more than a dozen protected areas in eight other countries on the continent), signed an agreement to take over the management of the Bazaruto National Park for 25 years, the emphasis on creating a conservation-led economy where eco-initiatives benefit local communities. The government set aside the 1,430 square kilometre reserve in 1971, Bazaruto a critical sanctuary for numerous species of marine megafauna including dolphins, sharks, whales, whale sharks, manta rays and turtles.

0 0 0
Previous : Wakanda vs Eswatini – How do Africa’s two newest countries square up?
Next : Lilongwe Wildlife Trust looking for Volunteers to research Samango Monkeys in Malawi