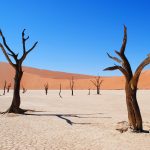 The entire world is truly a strange place, the way its made, how it works are truly mysterious. So every place we visit must basically be the strangest places to visit on Earth.

Now that we are regularly accustomed to these ordinary strange places, there are places on earth that are truly the strangest, and you won’t believe they exist.

Below TravelKinda brings to you a sample of these for you to explore and experience the Stranger Things!

This is the most mineralized lake in the world with 365 separate pools arrayed in a mosaic-like pattern.

Located in Osoyoos, British Columbia this is one of the more helpful strangest places to visit in the world with its reputation for healing diseases.

Each of these spots holds highly concentrated chemical content which has properties of curing diseases.

At a bold height of 2.5 metres the bronze statue of Jesus is submerged in Italy.

This is one of the favorite places for scuba divers and also one of the most mysterious places on earth.

The underwater statue of Jesus Christ is an original copy of Guido Galletti’s statue, which is located in the Mediterranean Sea, just off the San Fruttuoso coast.

Blood falls is a truly amazing sight as it contrasts amidst unending whiteness of the snow.

The reddish tinge of the water is dur to the presence of huge amounts of Iron.

Located in Antarctica makes this one the most difficult to reach on our list of strangest places to visit on earth. Researchers at the University of Alaska have solved the mysterious colour of the falls by finding the existence of oxidized iron in ocean saltwater.

Sea of Stars – The Maldives

Vadhoo Island in the Maldives has an extraordinary phenomenon with the surrounding sea shining bright blue during the night, which looks like a sea of stars.

This is caused due to the presence of bioluminescent sea plankton.

Maldives is also known to be one of the cheapest destinations in the world to go touring, so you must plan a visit to this beautiful, but strange place.

Rainbow Mountain is a peak in Peru called Vinicunca or Montaña de Siete Colores, and is truly colourful in appearance.

This an extremely hard place to reach but worth the strenuous trek.

The colors of intense red, pastel blue, pink, yellow and green do not exhibit any scientific explanations for this phenomenon, but will dazzle and delight you with the brilliant view from the top of the mountain.

One of the most bizarre places on Earth, with oddly-shaped pine trees is located near the town of Gryfino, West Pomerania in Poland.

The reason for odd collection of curved trees amidst normal forests full of straight trees has yet to be explained.

A massive fossil or possibly an alien spaceship landing site! The Richat Structure is becoming one of the strangest places on earth.

Located in the desert, the structure has a diameter of almost 30 miles!

This is a circle-shaped formation is in the middle of Mauritania in western North Africa.

Several resorts and hotels are located around the Dead Sea in Jordan.

Contradictory to the name, The Dead Sea is a Lake, with a high volume of salt and other minerals in the water, almost 10 times higher than the ocean, which increases buoyancy and allows you to float with ease.

Mostly visited by researchers and scientists, this is one of the strangest and most mysterious places on earth, with symmetrical square caves, situated on the uninhabited islands of Staffa in Scotland.

Snorkeling in Silfra Rift, which occupies an area of approximately 600 by 200 metres is one of the best experiences in Iceland.

This wonderful natural phenomena will leave you bedazzled.

The confluence of Rhone and Arve Rivers – Switzerland

This meeting of the two rivers is a sight to behold with one river flowing in blue and other in brown and never fully mixing.

The reason for the separation is the different density of the waters, which form a defined contrast between these two rivers of Switzerland. They finally mix in Geneva.

Located at the Naica Mine in Mexico, the cave has been growing underground in Mexico for more than 500,000 years.

Huge shiny mineral pillars are sure to make you feel claustrophobic.

Located deep in the bowels of the Earth this is a must for all nature lovers and an interesting scientific study on how organisms can survive in the extreme heat and humidity.

Recent scientific research has shown that the pink hue of the beach occurs due to the foraminifera, a microscopic organism that has a reddish-pink shell.

The sand contains coral, shells, and calcium carbonate. There are only a few pink beaches in the world and this one in the Bahamas is the most famous.

Located near the borders of Arizona and Utah is a sandstone rock formation that creates a dreamlike world of whirling colors and hallucinogen patterns.

There is no signage for visitors to preserve the natural beauty and integrity of this natural site, so visitors must find their way in and out of this site on their own.

The Al Naslaa Rock Formation in Saudi Arabia looks like a slit between flat faces and is one natural occurrences that will leave you bewildered.

A rare 145 ft underground waterfall located inside Lookout Mountain near Tennessee. Ruby Falls cave has a purplish hue that highlights cave formations like stalactites and stalagmites, drapery, flowstone and columns, all of which have been existing for millions of years.

The caves have recently opened to the public, so do not miss out on witnessing this strangest places on earth.

One of the most popular tourist attractions in Hanoi, Vietnam, the railway track’s proximity to the shops, with speeding trains passing straight through this street twice a day.

One can feel the iron resonate against your skin, while you dine in one of the cafe’s in the street.

Terrifying yet exciting and one of the strangest places on earth.

This is world’s largest rock, which is in itself a mountain. Although visitors are now discouraged to protect the natural monument, which is scared to the Aboriginal people of Australia.

The rocks surrounding the Uluru have all but eroded away, and this single giant rock has stood to become the longest surviving Monolithic rock structure.

Its height is 348 metres with a circumference of 5.8 miles.

These pancake like rocks are formed by thousands of layers of sandstone and limestone concentrated on the ocean floor.

Situated in New Zealand, they will amaze you with the attractive features of the formations.

There are walkways through the rock formations, parts of which are also wheelchair-accessible and others carved into stairways up and down the rock faces.

Located in Namibia, Dead Vlei is a dried oasis that comprises sun-blackened dead forest in white clay, the name of this place translates as Dead Marsh, and is also known as Dooie Vlei.

The struggle for growth here looks really impressive when you see the roots of the trees have come out looking for moisture due to the lack of water.

Surrounded by rust-orange giant dunes give Dead Vlei a contrasting background, which is also said to be the highest sand dunes in the world.

0 0 0
Previous : Celebrate Acacia Africa’s 25th Birthday with Safaris from only £203 per person
Next : Stray from the herd with Ranch Rider adventure holidays