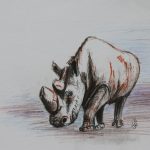 Sketches of wildlife artwork by celebrities from across the globe are set to premiere in Harrogate as part of a campaign to raise awareness about species extinction.

This year’s collection of artwork by celebrities and explorers will go on display for the first time in the North at the Wildlife & Safari Travel Show taking place at Harrogate Convention Centre in October.

The wildlife artwork collection will be later sold in an online auction. Last year’s Sketch for Survival raised £58,000 to support Explorers Against Extinction conservation projects.

Contributors to Sketch for Survival donate a 26-minute sketch or original artwork of an endangered species because an elephant is poached for its tusks in the wild every 26 minutes.

Sir Ranulph Fiennes said: “I’m pleased to support the Explorers Against Extinction campaign. Species extinction is such an important issue.”

Fellow British explorer Levison Wood said: “I feel it my duty to ensure that we continue to explore the world in a sustainable way. I am delighted to support Explorers Against Extinction in their efforts to promote conservation and protection of rare and endangered species and their environments.”

Drawing inspiration from hit TV shows Serengeti, Blue Planet, Dynasties and Our Planet, the show will feature a line-up of celebrity speakers and exhibitors including adventurer and conservationist Holly Budge, the first woman to skydive Everest. Holly is the founder of charity How Many Elephants, which is educating a global audience about the devastating impact of the elephant ivory trade.

The BBC ONE Show’s wildlife presenter Mike Dilger will discuss his colourful career from his adventures as a young naturalist to his work as a biologist in the tropical rainforests of Ecuador, Vietnam and Tanzania.

A 360 VR Travel Experience theatre will enable visitors to experience trips of a lifetime in Virtual Reality including swimming with seals and meeting the penguins.

Chris Erasmus, of the Wildlife & Safari Travel Show, said: “We are very pleased to support Explorers Against Extinction. It’s a huge honour to host the Northern premiere of this year’s Sketch for Survival which will demonstrate the conservation challenges we face across the world.

“We hope visitors to the show will be inspired by the collection of artwork as they explore the many wildlife and safari travel experiences on offer.”

The Wildlife & Safari Travel Show, run by Converge Exhibitions, returns to Harrogate Convention Centre for its second year on 12-13 October 2019.