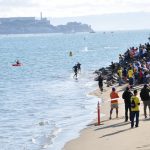 The Escape from Alcatraz™ Triathlon

The Escape from Alcatraz™ Triathlon

2018 sees the 37th annual Escape from Alcatraz™ Triathlon. Considered to be one of the hardest triathlons in the world, the event has grown into a major spectacle with top triathletes from more than 34 countries competing and over 50 teams of 2,000 athletes, including amputees, completing the 1.5 mile swim from the island to the mainland and then an 18 mile bike race and 8 mile run through the heart of San Francisco.

The icy San Francisco Bay waters are on average 12° Celsius and famed for being a breeding ground for leopard sharks, brown smoothhound sevengill sharks, cowsharks, spiny dogfish sharks and soupfin sharks, which give the swim a bit more excitement.

As well as the triathlon, spectators enjoyed the weekend long free Fitness Festival and Expo for the health and fitness industry with the latest products and services, food and more.

The Spanish named the island “La Isla de los Alcatraces,” meaning “Island of the Pelicans” in 1775 as the windswept island was home to colonies of pelicans. The US Army took over the island in 1850 and built a military prison. This was converted into a maximum security Federal penitentiary in 1934 earning a notorious reputation before it was decommissioned as a prison in 1963.

In reality the reputation was not deserved with inmates having individual cells and their food was the best in the US prison system. Prisoners were allowed to take as much food as they could eat and were penalised if they left any. Good behaviour earned privileges including weekend softball with Alcatraz boasting 4 minor and 4 major softball teams. Prisoners in other Federal prisons actually requested to be moved to Alcatraz.

Amongst the 1,545 inmates were the famous Al Capone who played the banjo in the prison’s band, ornithologist Robert Stroud, known as the Birdman of Alcatraz and George “Machine Gun” Kelly.

Although the prison claims that there were no escapes, in 1962 three prisoners, Frank Morris and John and Clarence Anglin used spoons and improvised drills to escape their cells and made it to the water’s edge never to be heard of again. Officially all 3 were presumed to have drowned and their story inspired the1979 film “Escape from Alcatraz,” with Clint Eastwood.

In 1969 a group of 100 American Indian activists led by Mohawk Richard Oakes took over the prison citing an 1868 treaty granting Native Americans rights to unoccupied federal land, the Indians demanded the deed to Alcatraz to establish a university and offered to purchase the island for $24 in glass beads and red cloth, which was the sum paid by settlers for Manhattan in 1626.

Alcatraz is now a protected landmark and San Francisco’s most popular attraction. The standard Alcatraz tour costs £18 and includes the ferry trip and an audio guide.

0 0 0
Previous : Walking and Hiking Italy’s South Tyrol and the Dolomites
Next : Discover Idaho