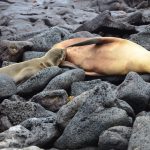 The Galapagos Islands – The Eighth Wonder of the World

The Galapagos Islands – The Eighth Wonder of the World

For scuba divers, Galapagos, 1000km off the Ecuadorian coast is the ultimate destination, where cold and warm waters meet to produce a massive frenzy and an enormous feeding ground for an immense variety of marine life.

The best way to see “everything” is by boat and although day boats are available, a liveaboard is thoroughly recommended to guarantee encounters with the massive whale sharks, Galapagos sharks and hammerhead sharks, turtles, seals, dolphins, manta rays, eagle rays, sunfish, moray eels and the smaller marine life including iguanas and sea horses. For those who enjoy snorkelling, visit the southern islands where you can expect to see rays and sharks. More excellent snorkelling can be found centrally at Chinese Hat where Galapagos penguins, turtles and sea lions are highly likely to accompany you on your swim.

For nature lovers, the western islands including Isabela and Fernandina, are the only islands where the flightless cormorants can be found alongside whales, dolphins, Galapagos penguins and huge colonies of marine iguanas.

Visit the southern island of Espanola to see the largest bird in Galapagos, the waved albatross as well as the quirky famous blue footed boobies and then buy the rather rude t–shirt as a gift for your friends back home! For flamingos, visit at Floreana Island.

The central islands offer giant cactus forests on Santa Fe and a visit to the Charles Darwin Research Station on Santa Cruz is a must–see for their incredible variety of tortoises in various stages of development. Whilst there, make sure you trek up to the highlands to see the giant tortoises in their own natural habitat. Spot sea turtles and pelicans or just relax on the white sands of Tortuga Bay, one of the most beautiful beaches in the Galapagos.

Genovesa Island, in the north is known as “The Bird Island” due to its numerous and varied bird species that nest there, is one of the only places to see masses of red footed boobies as well as many magnificent scarlet throated frigate birds. Isla Lobos, is ideal for bird watching the blue footed boobies and nesting frigate birds as well as being amazed by the large population of sea lions.

There 18 islands and 40 islets, all home to weird and wonderful creatures who have had to adapt over time in order to survive their rather unusual habitat. Probably most famous for its giant tortoises, these islands are host to fabulous creatures both great and small on land and water.

You can see how these islands may have contributed significantly to the inspiration behind Charles Darwin’s “Origin of The Species” with their massive variety of unique wildlife which has naturally evolved and now thrives in this wonderland.

0 0 0
Next : 10 days of Pandas, Culture, Cuisine and the Magnificent Yangtze