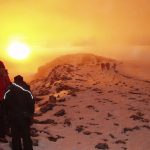 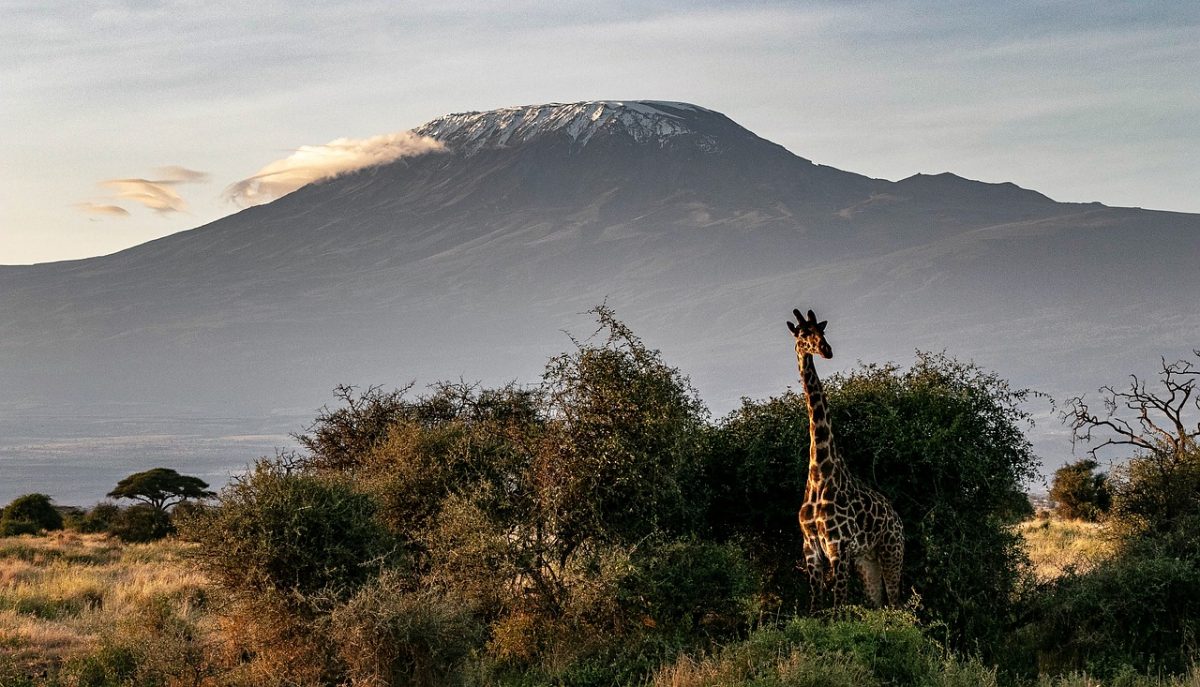 The mountain can be climbed all year round but the main seasons are: 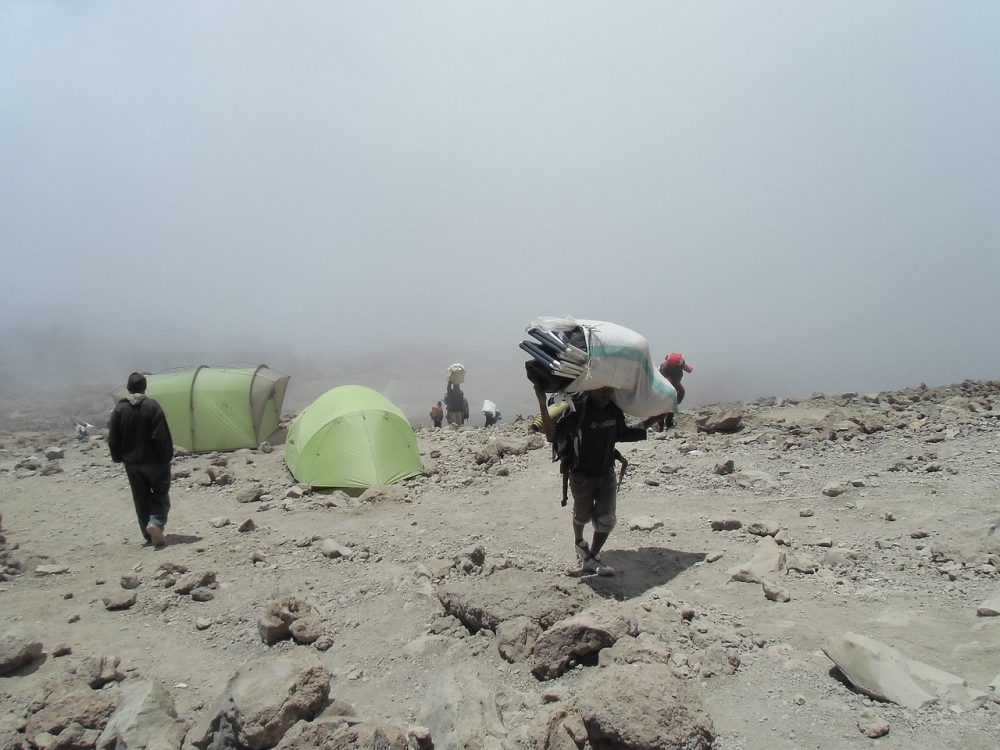 This will be covered in more detail below,  but these will be offered : 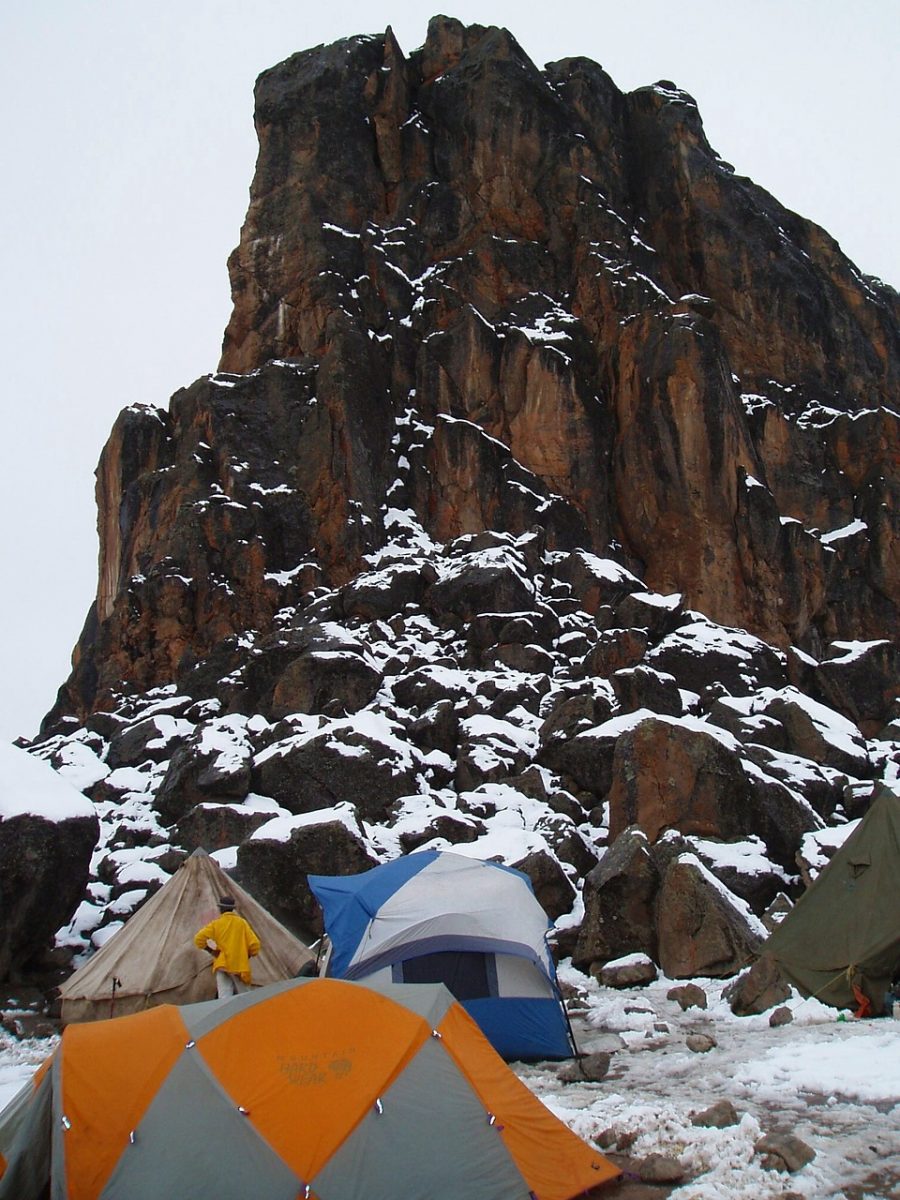 What You Need to Know

A good level of health and fitness is obviously essential for any trek. However, being comfortable at altitude, a head for heights and a positive attitude goes a long way too!

Swahili for “go slowly” you will hear and see “pole pole” everywhere.

3-5 litres per day. Have a hydration bladder as well as one or 2 Nalgene (or equivalent) water bottles and refill regularly. 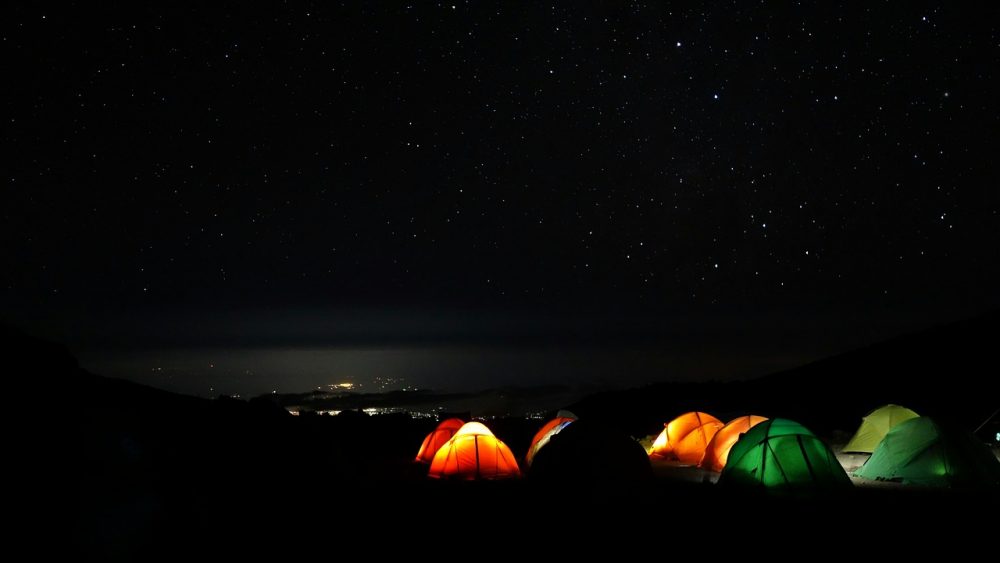 Personal choice but only take EXACTLY what you need and please consider your porters!

One pair of clothes for trekking and one for sleeping and when really cold wear both! Thin, medium and thick layers as well as essential gloves, hats, waterproofs and toiletries. Also remember there is a weight limit of 15 kg (32 lbs) for your porter, you don’t have to have that amount, you can be lighter!

Two are better than one.

Category 3 minimum for snow as well as sun.

Look after your feet by wearing worn in hiking boots that fit well, go up half a size to allow for expansion.  Make sure to apply foot powder regularly and have blister dressings handy.

Malarone or generic equivalent is recommended on arrival in Tanzania. However, if feeling adverse affects on the mountain, stop taking and  re start for your descend.

Your team will check your oxygen levels and heart rate every day as well as asking you questions on  your overall health and record the results. If too ill to continue, you will be escorted down. A good idea to have a trial size sample of toothpaste in your pocket in case you vomit. 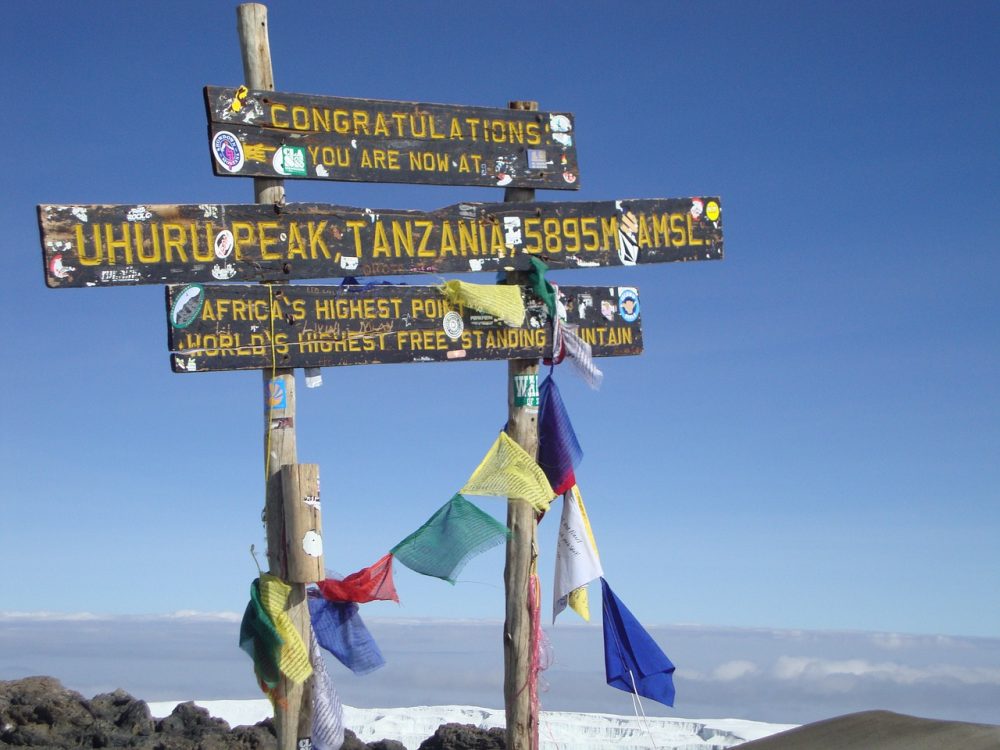 A warm drink before bed to make you feel warmer, feel better and sleep well.

The temperature of the food is not so important when you are trying to increase the warmth of your body although soup is good as it also fluid. Make sure you eat well with lots of carbohydrates and protein to give you energy and strength.

Have as much sleep, ideally 8 hours, or at least rest as best you can each day on the trek.

Dress in layers so you can add or remove clothing to adapt to changing weather, activity level, and body temperature. 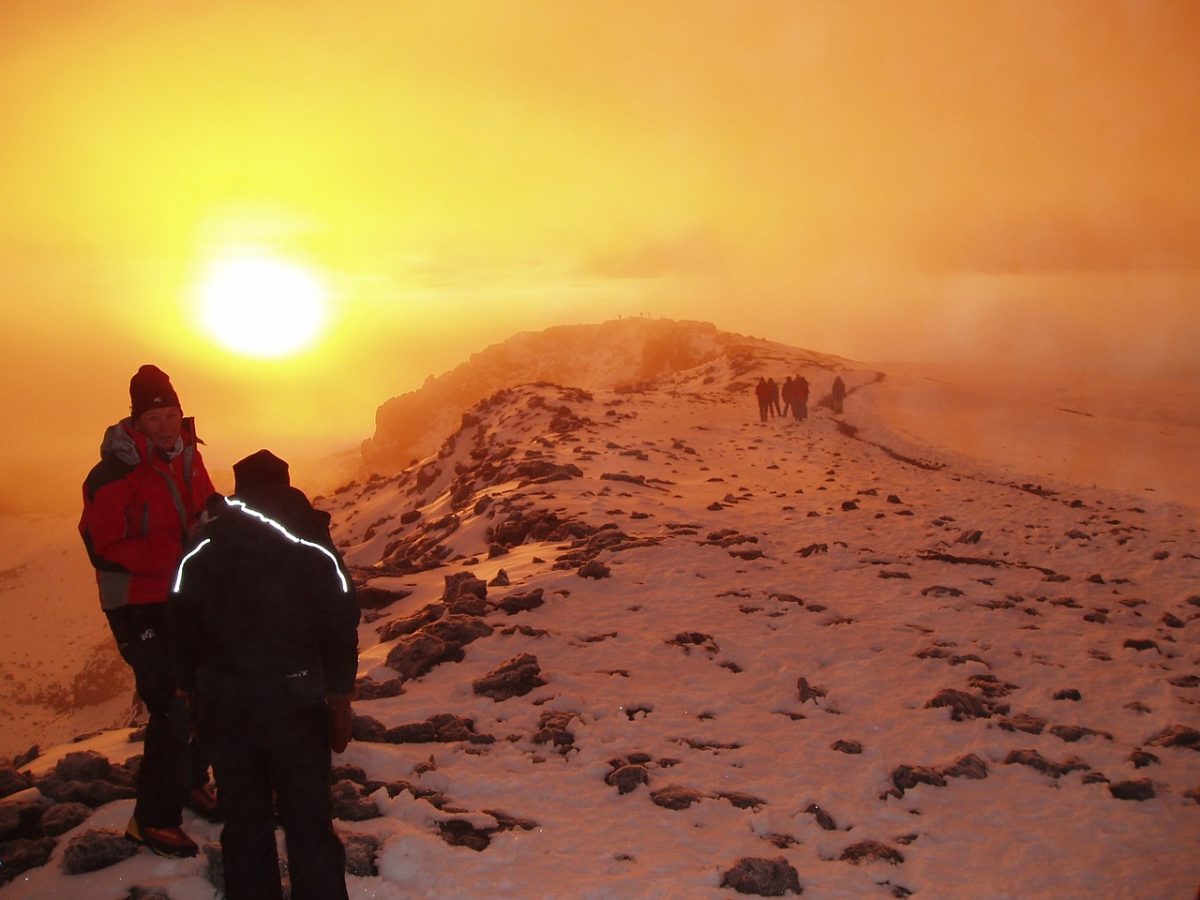 The only Kilimanjaro climb route that offers hut accommodation, camping is not allowed. The Marangu route is a comfortable walking path with a very steady, gradual slope up until you reach the last camp.

This gave the Marangu route the name “Tourist Route” because it is supposed to be “easy”, however this route is used by many shockingly unprepared “tourists”, rather than trekkers. The name “Coca Cola Route” stems from the sleeping huts along the route where they sell it as well as bottled water and candy bars.

The Machame Route also known as the “Whiskey Route”, a reference to the “Coca Cola Route”. Machame is indeed a more difficult climb in some respects, but it does have much higher success rates than Marangu, especially if you choose the seven day version. According to estimates, about 60% of the climbers on Machame make it to the summit, and over three quarters reach the crater rim.

This gives you a very short day before your summit attempt, which leaves plenty of time to recover, acclimatise and get ready. The six day version has the same problem as the Marangu route in that respect.

Not technically difficult, just more strenuous as the trail is often steeper and it involves many ups and downs, crossing a succession of valleys and ridges which is why it is also one day longer than Marangu.

The route is absolutely spectacular taking in the Shira Plateau, the Lava Tower, the Barranco Wall. Starting from the west, circle Kibo on the southern side, and then descend on the Mweka route in the south east. The variety is hard to beat. Machame is considered the most scenic Kilimanjaro climbing route and for this reason it has become the most popular route.

This has the advantage that you can find many budget options for it however it does get very crowded. If you are confident in your ability to hike in difficult terrain for days in a row, you like camping and nature, but money is tight, then Machame may be the right choice for you.

The Rongai Route: The six day version of the Rongai route (via Mawenzi Tarn) is the route of choice for those looking for an easy climb with excellent success rates.

It is away from the crowds has great scenery and a wilderness feel, although a little more expensive.

The Rongai route is the only climb route that approaches Kilimanjaro from the north. The descent is in the south-east via the Marangu route, so you get to see both sides of the mountain.

The extra transport cost makes a Rongai route climb more expensive and also because there is less demand and fewer budget operators. It does have a reputation of being less scenic, but even if there is not quite as much variety as on Machame, it is still a spectacular route, especially on the later days. The camp beneath Mawenzi Peak is one of the most scenic on the mountain. Rongai is also one of the routes where seeing wildlife on Kilimanjaro is still possible.

The Rongai climb has the same easy, gradual climb profile as Marangu, rising very steadily with no steep climbs involved. However, the camps are staggered a lot better than they are on Marangu.

On your last day before the summit attempt you only ascend a few hundred metres, and you have all afternoon to rest and acclimatise. With a good operator you have an 80 – 90% chance to make it to the crater rim, and 70 – 80% will make it to Uhuru Peak.

There are several variations to the Shira route. It can be done in six days but most operators also offer a longer version of it. A really good operator will also time their departure and stagger their camps in a way that avoids the heaviest traffic on the Machame trail.

That and the added transport cost can make Shira a more expensive option. The first day on the Shira route is different to other climb routes because it  follows a four wheel drive route. So you either walk on the road for most of the day (not very attractive) or you opt to drive as far as possible.

Like the Machame route, the Shira route is for people who are confident in their ability to hike in difficult terrain and camp out for extended periods. It has less traffic but it is a more expensive option and you should also be confident about the way you will react to the altitude on the first day.

The start of the trail is also known as the Lemosho Glades. Lemosho is usually a longer trek, seven or eight days, and there are many variations. Which one you take depends on the operator. A really good operator will also time their departure and stagger their camps in a way that avoids the heaviest traffic on the Machame trail.

The length, the remoteness and the added transport cost make Lemosho a rather expensive option. However, the longer itinerary and the fact that there are no budget operators (you can’t do this route on a budget) lead to excellent success rates on this route and it has become quite a popular one.

It is a route for people who are confident in their ability to hike in difficult terrain and camp out for extended periods, who want a superb wilderness experience and for whom cost is not the main consideration. 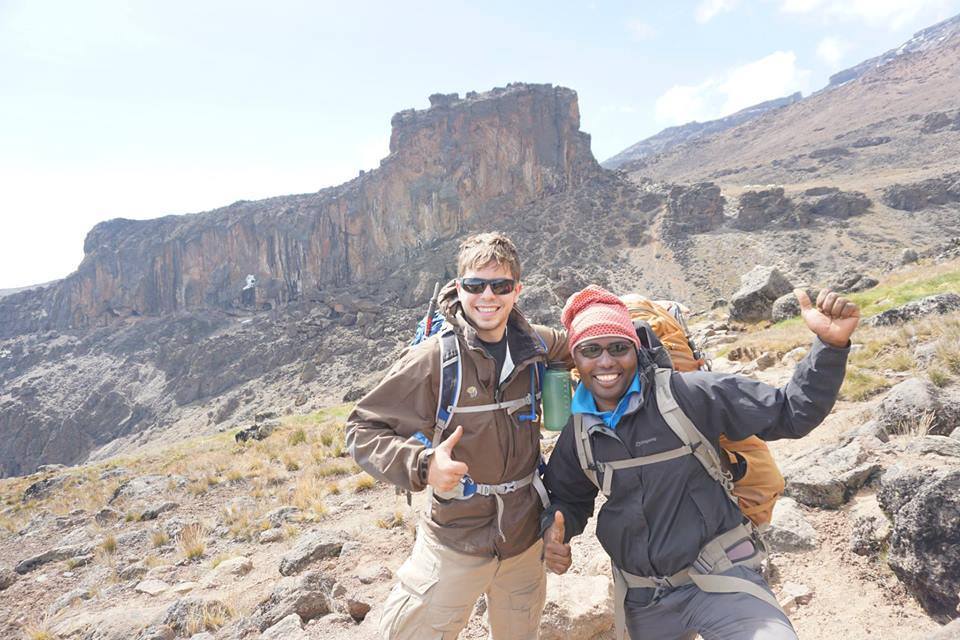 The Umbwe route is not a technical route, but it is a very direct, very steep, very tough, and in parts very exposed route.

The Umbwe route joins the Machame route near the Barranco Camp on the second night. On the other routes Barranco Camp is reached on the third or fourth night. Parts of the trail on the first day are so steep, they can only be negotiated because the tree roots provide something like steps.

The tree roots also serve as handle bars to haul yourself up where needed. The second day is also steep and uphill all the way. The exposed ridge is not for people uncomfortable at height.  This is the most difficult and demanding of all Kilimanjaro climb routes. Having said that, it is a spectacular route!

The Northern Circuit is the newest and longest route on Mount Kilimanjaro. It begins in the West at the Londorossi Gate and follows the same path as the Lemosho route for the first two days.

After crossing the Shira plateau the path veers north near Lava Tower, following the longer Northern Circuit instead of the more popular Southern Circuit via Barranco Valley. The route circles around the quieter northern slopes to the east side of the mountain.

The Northern Circuit is longer than the other trails on Kilimanjaro, taking a minimum of eight or nine days to complete. The eight day trek skips the additional acclimatization day that is usually spent at Shira Camp 2 and continues straight on to Moir Camp.